The big question on everyone’s lips this week has been what effect we’ve seen, if any, so far after the announcements last week by Mr Sunak. So I’ve taken a little look.
The below table is a week on week comparison, for both this year week on week and also the same week in 2020, year on year.
Let’s start with New Instructions:

So as we can see from this table, UK wide new instructions have been down when compared to the same time last year every week. However, they have generally been growing week on week (bar 2 weeks at the beginning of February) and since the beginning of March they have grown quite considerably (13% on the previous week) and are up to 95% of the same week in 2020.
Now, the SSTC’s: 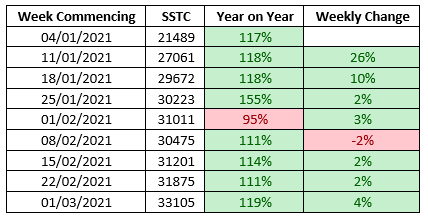 The SSTC table shows a lot more green – which highlights growth both year on year and week on week. Last week, we saw 19% more properties being sold (SSTC) than in the same week of 2020. If we remember back to Q1 last year, before COVID-19 kicked off, we were in the middle of the “Boris Bounce” where confidence had returned to the market after the December 2019 elections and volumes were up on the previous year, which had been riddled with market doubts around Brexit in particular.
So with the housing market hitting the time of year when, traditionally, the market starts to pick up pace with all the movers aiming to move in summer entering the fray, alongside the additional benefits of the stamp duty extensions in parts of the UK and also the First Time Buyer mortgage guarantee scheme that was also announced last week, as well as the easing of restrictions UK wide and the sun making an appearance too, we should see these volumes either continue growing or at least stay high for a while now.
Take care everyone
Your Customer Service Team